How to Build a Film Production Budget

Managing a film project can seem simple enough - write or find a script, cast actors and obtain equipment. But not so fast there Scorsese, for a truly successful production process you'll need to build a film production budget first!

Creating a budget will help you determine where you need to invest your time and money, keep surprises to a minimum and provide a guideline for you to follow during every stage of production.

That's why farmerswife has created an easy way for you to go about the whole process through our film budgeting software. Which is specially designed for media professionals like you, who are looking to simplify their workflow and maximize their time!

How to plan your film production budget?

When embarking on any film production, whether feature or short, building a production budget is one of the first and most important steps.

Once you've started thinking about the various needs of your production, you'll be able to understand your shooting schedule and overall production needs more effectively, it may be worth it to use a scheduling software to be able to manage and schedule all your assets.

If you are working on an independent film, this can be crucial, as creating a film budget as soon as you have a project allows you ample time to complete the fundraising required. And, nobody wants to fund a film if they can't see the budget!

What to Consider When Creating a Film Production Budget?

Now that you have figured out what you'll need for building a production budget, you can further advance your financial planning skills by breaking down each line item into this formula (unless the item has a flat fee rate):

This will make it easier for you, and ultimately anybody looking to finance your film, to see the most accurate version of what it will cost to make your cinematic dream a reality. Here, it also helps to break things such as equipment rental down into even further separated lines (camera rentals, audio rentals, lighting rentals, etc.), an equipment rental software can make this step very easy for you.

The more you can break down your production budget, the more successful you will be at staying within your finances. To better understand the rates for what you need, it is best to research film production costs in your specific country, city or state.

Planning a production budget doesn't have to be hard. Various film video production project management software apps exist along with all-in-one toolboxes for the media industry to get you started and make sure you're budgeting efficiently throughout the entire process.

farmerswife has designed a series of extra options to suit varying requirements whether you are in production, post-production, broadcast, advertising agency, equipment rental or a corporate media department.

How to Create a Film Budget

There are a lot of factors to consider while preparing your film budget, you should be considering all costs – major and minor, from actors and crew, equipment rentals, such as expendables (tape, batteries, memory cards, etc.), meals/snacks, location rental fees, travel expenses, editing, color grading, festivals… With a complete film production budgeting software this can be easier to manage and oversee!

Various templates exist online, or you can simply check out our Budgeting Add-On available through our media management services. With this add-on, you can create customized budgets and quotes, keeping a real-time check on costs, instantly updating budgets, and generating reports and analyses.

In film production, "above the line" refers to the group of people who are involved in the film during the development phase. These roles typically include but are not limited to the screenwriter, producer, director, cast and everything else that has to be in order before production begins. These expenditures are usually set, negotiated, spent and promised before principal photography begins. They include rights to secure the material on which the screenplay is based, production rights to the screenplay, compensation for the screenwriter, producer, director, principal actors and other cost-related line items such as assistants for the producers, director or actors.

Everything else is considered to be "below the line" in a film budget and includes production costs such as the crew, locations, permits, equipment, etc. This task is usually assigned to the Production Manager or UPM of a production and should be completed before principal photography begins for any project.

The distinction originates from the early studio days when the budget top-sheet would literally have a line separating the above-the-line and below-the-line.

What's Included in a Budget?

A film budget is broken down into three parts: pre-production, production and post-production. Here's what each section should include (keeping in mind that you may need to make adjustments based on your needs and the size of your production): 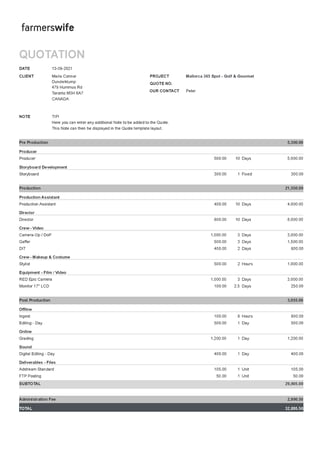 Manage your production with farmerswife, the best film budgeting software!